On Rock Climbing and Journeys 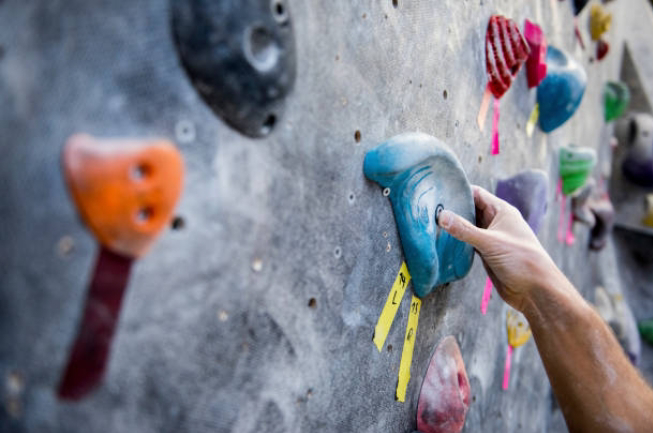 A friend recently discovered that she's an Enneagram 8. Ryan, who has known for a couple years that he's an 8 and has already done the 8 work told her, "The best thing you can do for yourself is to just accept that you're always going to be the one working the hardest... That no one is going to match you."
When I asked him more about it later he said that he lived in constant frustration in his younger years. He has great work ethic so he'd sometimes think, these jerks are just trying to make me do all the work. I'm not going to do anything tomorrow. And he'd be as lazy as he could for, like, 20 minutes. But then he couldn't do it anymore. It went against his own values so he'd get right back to outperforming everyone else, seething and assuming they were intentionally holding back so he would do their share.
They weren't. They were just working at their pace, at their level. Now he knows. But it doesn't mean it doesn't still frustrate him sometimes.
A week or two later he was working on one of our vehicles and I (a type 9) told him, teary eyed, about something that was going on with a friend. She wasn't being mean to me, she just... Well, I told him it seemed sometimes like I was just there in her world, like she doesn't love me as much as I love her.
This is not the first time he's heard me say this in the 16 years he's known me.
He stopped what he was doing, looked me in the eye, and said, "She doesn't. She doesn't love you as much. I used to think you just picked bad friends but I don't think so now. I think... Remember how my work was to accept that I'm always going to be the one working hardest? Maybe your work is to accept that you're always going to be the one who loves harder, or who cares more about the relationship."
And then hot, fat tears started to spill over because I knew with absolute certainty that he was right and I hated it. I still do. I'm working on accepting it and mostly I have but it still hurts.
At first I felt kind of excited about this revelation and wanted to share it with people. My 8 friend, the recipient of Ryan's 8 advice, totally understood. Everyone else I've told so far has been visibly offended so I don't tell anyone now.
It's lonely that way. I'm not being mean. I'm not saying they're heartless or bad at expressing love, but that's how they received it... which, I guess, is pretty fair.
But everyone has their own big thing to accept, right? Like, 1s, people aren't being jerks... They just genuinely don't certain things as being bad/wrong and don't care as much as you about making things right. And 2s, I imagine your path looks a whole lot like my 9 path. And how many 3s did I crush when I was on their team in AWANA games or in PE because I don't care about winning and in fact sometimes feel anxious about winning because I don't want the losing team mad at me?! Or maybe I'm dead wrong about those and shouldn't even try to guess at other types' journeys.
But the most exciting part of this revelation was that beautiful moment of realization that my husband and I are wired so differently but still he manages to get me.
And marriage is just the coolest thing to me. I haven't been brave enough to go back and read baby Sara's thoughts on marriage because re-reading my old writing always makes me painfully self-conscious... But I suspect I still have a lot of the same awestruck, starry-eyed wonder about this sacred union.
Marriage is like indoor rock climbing. We're all on our own path. We each chose a different color route.
I can see my husband, over there on the blue route, and I can cheer him on. Sometimes we're side-by-side and other times one of us is way ahead of the other. Sometimes I can see things he can't from my vantage point so I'll call over, "Put your left foot back down and then you can cross your right foot in that toe hold so so... Yeah, see? You got it!"
He can do the same for me.
I will never know what the blue route is like. Or the red, yellow, green, orange... This is my route and it's the only one I actually feel and experience. Sometimes one of those holds is broken or just spins around on a stripped out screw. I can't know that from all the way over here.
So my jobs, mostly, are to stick to my own route and to cheer him on. His jobs are the same.
We work best when we do our jobs. We don't do well when we try to map out the other person's route for them, nor when we isolate ourselves and try to climb alone or feel superior if we come into a stretch where we're ahead.
We're in this together even if we're on different routes.
Even when the course gets lonely, we're never alone.
*Image via Getty Images
Posted by SK Bell at 9:20 AM