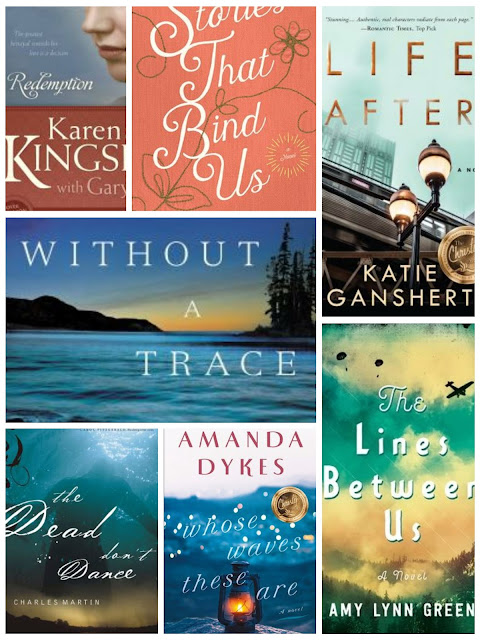 The Baxter Family books (contemporary)... This is a series about a family and it's filled with all the real elements of life. Love, birth, death, joy, sorrow, pain, triumph. It's my favorite series right now and I always warn that it's full of edgy stuff (substance abuse, adultery, and more) but always with a faith element tied in.

The Dead Don't Dance (contemporary)... This is a beautiful but emotional novel about a man whose wife slips into a coma after a tragic loss during childbirth. It's full of grief and reminiscence, but also beauty and grace. It'll be depressing if you don't naturally see more than one side of things but it'll deeply move you if you do.

Life After (contemporary) ... Our main heroine is wracked with survivor's guilt after she's the only person who walks away from a train bombing. She's dealing with a kind of impersonal grief for those she never knew, and she's also working on a memorial project with a grieving family who lost their wife/mother in the bombing.

The Lines Between Us (historical fiction)... This WWII story is about the mysterious death of a smoke jumper in Oregon and the secret investigation of it all by his sister and best friend. The grief in this one is not as raw as some of the others on this list but there are glimpses of it through the mystery.

Rock Harbor series (suspense)... This series is about a search & rescue woman and her dog. The first book is full of her grief as she grapples with the loss of her husband and son after their plane goes missing.

Stories That Bind Us (historical fiction)... This book surprised me in some ways. This is the story of a very recently widowed woman whose estranged sister shows up with a five-year-old son. The two form a beautiful bond through story and the focus of the story is on that relationship far more than her grief. This book almost doesn't belong on this list as a result but there is still an underlying grief so I added it.

Whose Waves These Are (historical fiction, timeslip)... This timeslip takes place partially at the end of WWII, when a young man starts a project to deal with his grief over the recent loss of his soldier brother. This is a favorite of mine and I was not even a little surprised when it won a Christy award.