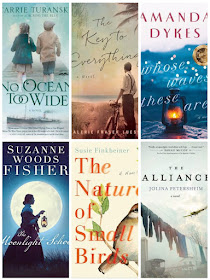 I have been a bookworm my whole life but I have not always read Christian books. I didn't really enjoy YA (young adult) novels as a teen so I read maybe ten of them during my teenage years, otherwise adult books.

I wish I hadn't read most of what I read back then but alas, I did. If I could go back, if love to recommend these adult novels to my teenage self! These are all clean Christian fiction novels featuring teenage main characters.

The Alliance... I've talked about this Amish apocalyptic story, set immediately after an EMP, a few times. This one is edgier than most Christian fiction as there is violence (people in the outside world want to take out the Amish community or their resources) and non-graphic talk about a person who used to use and sell drugs. There's also non-graphic about people fearing someone may have been sexually assaulted. I found this story (and it's sequel, The Divide) quite compelling. This one is told from the perspective of a 19-year-old young woman in the Amish community (with lots of emphasis on her 15-year-old brother she's a guardian for) and the Englisher (non-Amish) young man who happens upon her community at the start of the EMP so it will be of interest to teen boys and girls alike.

Dear Mr Knightley... My bet is that our main protagonist, Samantha, is about 19 years old, maybe 20. She's given a scholarship to a prestigious journalism program but the caveat is she must write progress letters to her anonymous benefactor, whom she calls Mr Knightley. She tells him everything and things get a little crazy! This is an epistolary novel, told all in letters, and it's a retelling of classic novel Daddy Long Legs.

Even Now... This Karen Kingsbury novel is the exact kind of dramatic teen pregnancy cautionary tale I loved in middle school. In this one our heroine, who is around 17 or 18, has been raised by her grandparents. She discovers her mother's old journals, from she was a pregnant teen in the 80s, and uses the clues found there to search for her estranged parents. The sequel, Ever After, is about the daughter's relationship with her new boyfriend and something that will be a spoiler to the first one. I liked both.

The Key to Everything... This one will also work well for teen boys. Set in the 1940s, out 15-year-old male protagonist sets off on a bike ride down the coast of Florida, both in remembrance of his recently deceased father who once took the same bike ride and in search of the girl he's fallen for. All the main characters in this one are very sweet and almost flawless. I like the sweet mother-son relationship.

The Moonlight School... This one is set in 1911 Appalachia. Our primary protagonist is 20ish-year-old Lucy, sent to stay with her aunt Cora and help bring literacy to the hills of Appalachia. I also enjoyed the perspective of teenage Angie, who is sweet on a boy who's sweet on this young new teacher. Atmospheric and fun.

The Nature of Small Birds... This book was really interesting, at least from a writer's perspective, because it's essentially a story about Mindy that's told in alternating timelines and from her family's perspectives... But we never actually hear from Mindy herself! The 1988 storyline is from Mindy's sister during their teenage years. Mindy was adopted from Saigon, Vietnam in the 1975 Babylift. As an adult she's going back to meet her birth mother and it brings lots of things to the surface.

No Ocean Too Wide... This is a story about the McAllister children who are separated when their mother takes ill. This based-on-true-events book is set in the early 1900s and is about the children's attempt to reunite the family despite seemingly impossible circumstances.

The Shunning... Katie is kind of a rebel Amish girl, always stretching a toe over the line and wishing for things she knows aren't suited for Amish women. She crosses the line and is subject to a shunning, but also unearths a family secret and goes to great lengths to track it down. I don't normally love Amish fiction or Beverly Lewis' writing style but I still liked this enough to finish the series!

Whose Waves These Are... This timeslip, set in sleepy Maine, is one of my favorites. There's a contemporary anthropologist heroine unraveling the story of an old man's young adult past, which we get to see from his own perspective just after WWII. This is a novel about grief, unconventional families, forgiveness, courage... Love it so much!

Also on my radar: Children of the Stars // The Choice // A Long Time Comin' // Set the Stars Alight // Stars of Alabama // Under the Magnolias // Under the Tulip Tree // When Stars Rain Down