The Christian Bookworm: Six Historical Fiction Reads on my TBR

I love a good nonfiction book and have no problem finding variety there. I like Christian living, memoir, science, psychology, marriage, parenting, how-to… but my fiction, I’m discovering, is quite a bit less varied. I have found that I pretty much only get excited about contemporary literary fiction or a good WWII historical fiction. Everything else, I am hesitant about. Suspense is too much for me these days, chick lit tends to annoy me, and fantasy has never been my cup of tea.

The more excited I get about history, the more I want to make myself branch out and try other historical fiction time periods. The past few I’ve tried, I promptly abandoned. I haven’t given up yet! Here are six historical fiction reads on my to-be-read list. 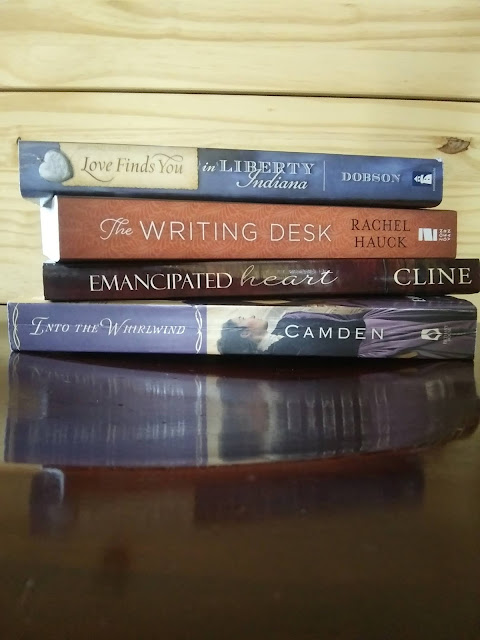 Hearts that Survive by Yvonne Lehman… Lydia and Caroline plan Lydia’s wedding aboard the Titanic. Their lives change forever when the ship goes down. “This epic tale of faith a perseverance follows their lives and the lives of their descendants as they struggle with all that was lost on that fateful night and what the future holds for those brave enough to face it.” I’ve had the Titanic on the brain lately because I was toying with the idea of writing a short story about it. I was very fascinated as a kid (long after the sparkle of the movie was gone) and read several novels about it in elementary school. This will be interesting.

Heaven’s Sky by Jan Cline: I took one of Jan Cline’s classes at the Spokane Christian Writers Conference and have been excited about her work ever since. The Dust Bowl embarrasses me. A couple of years ago I got a children’s book about it from the library because I was feeling dumb for not having a clue what it was. Now I sometimes feel lingering embarrassment even though I do understand it now. Still, I’ve been curious about this novel (the first in a series) and I’m looking forward to giving it a try soon.

Into the Whirlwind: This one will take me straight to the Chicago Fire. This is another historical event I know very little about. In fact, until 2016 I thought the Triangle Shirtwaist Factory fire was the Chicago fire. I also have a copy of I Survived: The Chicago Fire so I’m putting this one off for a little while and I’m hoping A will be willing to do a weird sort of Mom-and-me book club when he’s ready for that book. This is a very idealistic idea, I know, but he’s a very idealistic kid so it just might work out!

The Love Letter by Rachel Hauck: I have several Rachel Hauck books on my list right now (and two on my shelf!) because time slips are my favorite way to move into historical fiction. I’ve always struggled through Revolutionary War period books because even though I actually do know quite about that time period, I’ve found quite a lot of the books I’ve attempted to be written very dryly. Rachel Hauck’s writing seems very promising and I love anything to do with love letters so this should be a real treat.

Love Finds You in Liberty, Indiana: Civil War stories can be very painful for me but I found Melanie Dobson’s WWII book Hidden Among the Stars to be beautiful, inspiring, and hope-filled despite the painful content so I’m looking forward to giving this one a try! I got this one free out of a book exchange box recently and I’m looking forward to seeing if this one meets the same standard.

The Writing Desk by Rachel Hauck: Ah, the gilded age. What is the gilded age? Allow me to Google it for us. Okay. Mark Twain coined the term and it describes the period between the Civil War and Reconstruction, late 1860s-1896.  Now that that’s out of the way, I’ll just say that I’ve been excited about this time slip for quite a while and I have a feeling Rachel Hauck is going to be one of my favorite Christian fiction authors!

You’ll likely notice there is nothing from any earlier than the revolutionary war… that’s as far back as I’ve studied just yet. Everything else still bores me, and probably will until I undo my public school history education and replace it with excitement and adventure.

And, because I still love a good WWII story, a few of those on my list: Chateau of Secrets by Melanie Dobson // Emancipated Heart by Jan Cline // Vienna Prelude by Brock Thoene