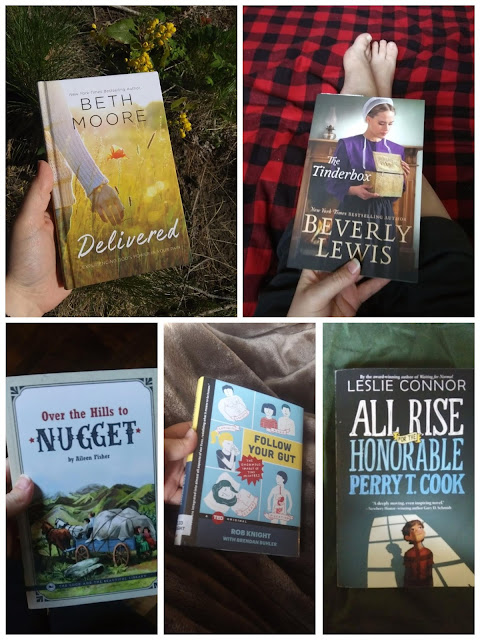 All Rise for the Honorable Perry T. Cook… Oh my word, this book was so goooood! The subject matter was, in my opinion, a bit heavy for the reading level. But it was riveting and inspiring and pretty great for kids just a hair older! Perry Cook was born a few months after his mother started a 15-year prison sentence. He was living in the prison nursery when the warden stepped in as his foster parent and allowed him to live there full-time to be with his mother (if this sounds too far-fetched already… it turns out prison nurseries are totally a thing!). Now the new DA has stepped in and removed Perry from the prison, but of course nothing is really as it seems and it’s kind of up to Perry to make it all right. But you guys, gosh. If you ever wanted a book to show your children that convicts are people too, man, this is it. All of the characters are so rich and real! They are remorseful or annoying or funny or pessimistic or annoyingly optimistic. They are misguided or deeply flawed or cold and grumpy… but they are not all good guys or all bad guys. They are all real. The book does deal with crimes, some which end in accidental death, which is why I’m not comfortable with it for the recommended reading ages of 8-12 (EIGHT, my word, no way!!) but I do think I’ll add it to my kids’ shelf for reading in middle school. Also, FYI, it did say the a-word and d-word, one time each if I am remembering correctly.

Delivered… I was so excited to read this book by Beth Moore after Breaking Free changed my life. Alas, it did not measure up. It was still a good book and it still had a lot of great things to say, but I felt like it first talked about how you fall into a pit, then about wanting to get out of the pit, and then there was a lot of “once you get out…” and then “now that you’re out…” but what was missing were those all-too important middle steps! People need to know HOW to get out of the pit! I imagine Get Out of That Pit did indeed give steps, but this was the adaptation to it. I think if you’re already in the middle of a healing journey and know what you need to do, this is a really wonderful book to keep you motivated and inspired. If you’re just starting, however, I think it’ll leave you feeling a little flat.

Follow Your Gut… Be prepared, y’all. I read several articles on how important our gut’s microbiomes are in relation to eating disorders (and the future of psychobiotics, ie treating depression, anxiety, bipolar disorder, schizophrenia, eating disorders, etc with probiotics!!). It’s kind of a crazy cycle which you have to be really intentional to break. I learned all about the microbiome from this blessedly short TED book and I gotta say, for the past week I have felt 0% bulimic. 0%. I have been working so hard on all the psychological/emotional stuff but after just a few days spent focusing on the physical aspect too I literally went to bed a recovering bulimic and woke up a recovered bulimic. I’m not saying it’s the cure (yes I am, but also I’m not just in case) but I will now forever preach the importance of gut health AND doing the psychological work when battling an eating disorder.

Happy Gut… I found this book by chance, when I put “microbiome” into the library’s search engine and requested a few too many of the results. This book explains leaky gut, the microbiome and therefor dysbiosis, and candida in great detail. I’m pretty confident I have all three issues! I did so much leaky gut work when I first went paleo in 2012 but now I’m seeing that I didn’t even come close to hitting up everything that needed to be addressed. I started working on all of this on my own and was really excited for the guidance of this book… but the day after I started reading it I had such a severe mosquito bite reaction I almost had to use my epi pen! I was dizzy, nauseated with stomach cramps, covered in welts and hives, so unbearably itchy I was actually in pain (if you’ve never been so itchy you’re a grown-up crying on your bathroom floor with socks on your hands, have you even lived?) and my chest tightened up so much it was hard to breathe! But then I had a bullseye rash and when I mentioned it to Ryan’s cousin, who has Lyme, she told me I needed to get myself to the nearest urgent care or ER right away because recent research has proven that mosquitos can indeed carry Lyme! The doctor who treated me was also aware of this and actually interrupted before I could even tell him all that to say “This looks like Lyme. We need to be aggressive about this,” and then went on to give me all the same information and then some. So anyway. Now I’m on these awful antibiotics and I do feel quite a bit better but my guts are the complete opposite of better. My obsessive nature has me lying awake at night picture all my good bacteria screaming in agony as they are murdered by the antibiotics, and all my bad super bugs rising up to finally defeat me. So I’m super grateful for the timing of Happy Gut (and especially my amazing little son who is the whole reason I became fascinated by microbes in the first place!) because I am using all this great information to make up for these awful antibiotics that are murdering the good microbes I just spent two weeks carefully tending.

Little Men… I loved Little Women and I’ve now read it three or four times, plus two different abridged versions… but I had never moved on to read Little Men. Oh, I loved Little Men!! I loved it even more than Little Women which I would never have thought possible! We listened to it as an audiobook on long car rides and my six-year-old son loved it just as much as I did.

Over the Hills toNugget… This was our latest family read-aloud and is a level four book through The Good and the Beautiful library. We all loved it! Ernie’s family was fun to get to know and their story reminded us a lot of Little House on the Prairie. If you loved Little House but your boy(s) aren’t interested since the main characters are girls, definitely give Over the Hills to Nugget a chance <3

Sing Down the Moon… I grew up in Arizona so was very excited to see that this Newberry Honor by Scott O’Dell was about a Navajo girl. The book spells it Navaho, though, so I was naturally a tiny bit irritated all the way through it. Still, I did ultimately like it. It’s been a long time since I read Island of the Blue Dolphins but as far as I can remember, I liked this one even more.

The Tinderbox… This is a new book by Beverly Lewis, one which will have a follow-up companion released in September. It took me almost two weeks to finish, which is usually a sign that I’m not super engaged in the story, but I did like it overall. The only other Beverly Lewis books I have read are the Heritage of Lancaster County books and I remember being a little more interested in those ones… but then this one ended with kind of a shock so I’m definitely hooked enough to read the follow-up!

*I received a free copy of Delivered and The Tinderbox from the publishers in exchange for an honest review.